Last week, I published a new ebook. Called Remain Vigilant, it consists of two linked one act plays set in the same fictional government agency that deals with surveillance. I actually wrote it over eighteen months ago, left it on my hard drive and forgot about it. My background is in playwriting, so this was before I got into writing short stories and other pieces.

It seems odd to believe now, given everything that has followed, that last year I thought extensive online surveillance was one of the biggest threats to our civil liberties here in Britain. I mean, it still is, but it has been eclipsed by so many other concerns. Edward Snowden’s revelations in 2013 of extensive monitoring by the NSA and GCHQ merely confirmed what many people already suspected. The government, in their wisdom, were watching everything we do, all the time. What was worrying about this revelation was that no one seemed to mind.  Everyone just assumed it had been happening for years anyway. The governement kept pushing and pushing at the envelope. There was widespread opposition to The investigatory Powers Bill when Theresa May tried to push it through, but the majority of people couldn’t care less. We were walking into a surveillance state far beyond anything Orwell could have dreamed of.

As I see it, there are a couple of reasons why being watched all the time is a bad idea for a civil society. Firstly, if you know you are being watched, it stifles freedom of expression. You will feel scared of speaking your true thoughts, scared of saying the wrong thing. Free speech is stifled before it even starts. Life under the Stasi in East Germany was the most extreme surveillance, and ensured a type of self censorship:

That was the real strength of the state security; to produce the effect that millions of people behaved towards one another with anxiety, self-control and suspicion. They ensured that if you told a political joke you automatically lowered your voice. Anticipatory obedience spread through every sinew of society and intimidated a whole nation
-Claudia Rusch, quoted in Mary Fulbrook, The People’s State, Yale University Press: 2005. Via here>

Secondly, this collection of data on every single citizen is easily open to abuse. Yes, the current government may be just and moderate. They may have the country’s best interests at heart by monitoring the populace. But what if someone like Trump gets elected? (Just to pick a random example of course. Insert your own lunatic here.) Someone who is immensely paranoid and ego driven and can’t tolerate insults thrown at them. An immensely powerful leader with a thin skin. Would you be so happy to hand over all your data to such a person? What about an extreme dictatorship? By creating these networks, the governments are handing a gift to any thought-crime obsessed nutjobs. The framework is in place if it ever changed. But that’ll never happen, like Brexit. Right? 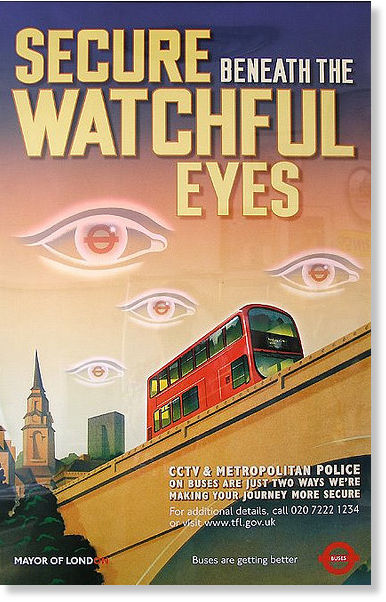 So during the writing process I was thinking about all of these issues. How far would you go to keep the country safe? At what point does security become paranoia? Who exactly is watching us? This last one stuck in my head. Who are the watchers? The first play, The Watchful Eyes, deals with this question. Keiran is a porn obsessed loser, who uses his power to watch women getting undressed. The title of the play sounds extreme, but it is actually taken from a wonderful poster the mayor of London produced years ago. As the play goes on, it mirrors the paranoia and confusion of the surveillance state. You can’t trust anyone.

One other thing that got lodged in my head was the sheer scale of the government surveillance state. They were keeping tabs on every single citizen of the country, the browsing habits, the sites they accessed. The servers and databases to store all of this data must have been enormous. To visualize this on stage, I came up with the idea of huge amounts of paper, filling every space. This became Paper Trail, where the madness and paranoia is taken to the extreme.

So I wrote it all, doing several revisions. I sent it to a few places but didn’t get very far. Then, what with the world imploding on itself this year, I forgot about governmental surveillance and I forgot about the play.

A few weeks ago, quietly and without any fanfare, the government passed The Investigatory Powers Bill,  called the “most extreme surveillance in the history of western democracy.” by one Edward Snowden. Suddenly all these thoughts came flooding back. I dug out the play and reread it. There was a few changes to be made. But mostly, I wanted to get it out there because it sadly seemed still relevant, even after eighteen months.

The bill has got royal assent. So the government has legitimised surveillance it was doing all along. Only now, a huge list of government departments can view your entire browsing history. Sure, they need a warrant, but all the data will be stored by GCHQ, ready to be taken by those who request it. So unfortunately, all the debates about privacy and security haven’t gone away. They’ve just got worse. I’m publishing this play now as a protest, in the hope it will get performed. It’s half finished as a script, but it needs a performance to make it real. /contact/”>contact me.</a> Just be careful about who is looking over your shoulder.

GCHQ probably copied my hard drive ages ago and had a read of Remain Vigilant. Why don’t you? It’s pay what you want on Smashwords.